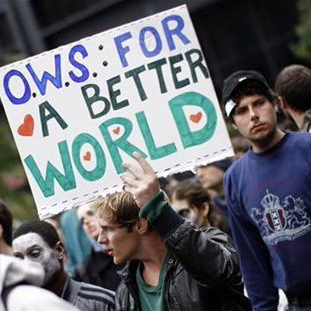 The Global Revolution has begun!! It is now 3 weeks into the Occupy Wall Street non-violent protest that has grown into a nation wide movement joining the rest of the Planet for a major paradigm shift!On 13 Jul 2011, the group Adbusters released this call: Occupy Wall Street! via a twitter feed that spread far and wide. (Credit: Reuters/Mike Segar)

With now dozens if not hundreds of organizations and cities across America, along with focus groups like Occupy Together and planning group  occupywallst.org, an info sharing site,  protesters are getting organized for a major reality change.  “The participation of every person, and every organization, that has an interest in returning the US back into the hands of it’s individual citizens is required,” states the good folks at Occupy Together. They continue on, “our nation, our species and our world are in crisis. The US has an important role to play in the solution, but we can no longer afford to let corporate greed and corrupt politics set the policies if our nation.

We, the people of the United States of America, considering the crisis at hand, now reassert our sovereign control of our land.

The coverage has almost entirely been censored from the mainstream media so check out You Tube, search the alternative press like Common Dreams and Democracy Now and get ready and get active for this change, the Real Change, to manifest the world we all have dreamt. We are the 99%!!

Read here for the NYC General Assembly Declaration of the Occupation of New York City.