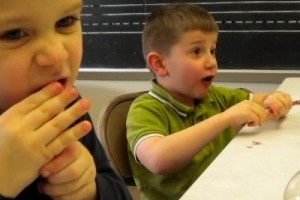 CHAPEL HILL — An e-mail from one of my children’s teachers to all parents in the class said in part, “The week of the EOGs we will have daily themes to keep up that positive energy. I will need [parents] to bring a few things… 1 bag of Twizzlers 2 bags of Tootsie Roll Pops

1 bag of Smarties 1 bag of fun size or miniature Snickers candy 1 bag of pretzel twists 25 strawberries 12 bananas” With childhood obesity running rampant and frequent reports on the alphabet soup of conditions like ADD, ADHD and hyperactivity, you’d have to be living under a rock not to see the absurdity of this request. The e-mail arrived at 8:20 p.m. I left the computer and hoped that perhaps no one would volunteer to bring in the “kiddie cocaine” and that maybe this sugar freight train could still be stopped. But by 9:11 p.m we had the Smarties and the pretzel twists “sent by my iPhone.” Twizzlers and Tootsie Roll pops followed at 10:52 and 11:01 p.m. respectively. Cars would be heading out to SuperTarget, treats would be packed in plastic bags. What kind of “positive energy” was this supposed to bring, and what does any of this have to do with the End of Grade tests? I asked the teacher if we could find something else to offer my son. I also mentioned that I didn’t think food should be a reward. She replied it wasn’t a reward, but part of a rhebus. “A what?” I questioned back. The candy would be used as part of a puzzle, the educational term being rhebus, she replied, and only one piece of candy could be eaten in school. Rhebus or not, regardless of where it was eaten, this candy would be consumed by kids, and somehow that still sounds like a reward to me. But I didn’t want to cause any more trouble than I already had (I haven’t figured out a way to discuss these sorts of things without feeling like Hester Prynne wearing the scarlet letter – in my case “S” for Snicker Snatcher), so I agreed to send in baseball cards instead of sweets. This issue isn’t about any particular teacher or classroom or school. My son’s teacher happens to be a terrific teacher. Some version of this story plays itself out in American classrooms every day. Perhaps the only thing that was unusual is that I got an e-mail alert before it happened. When I asked the principal why we allow candy in our schools, she conceded my point but said it was being done in moderation. And that’s where the sugar devil is, in the details. Exactly what amount of sugar is moderation? According to the USDA’s Dietary Guidelines for children, there are only 100-300 daily discretionary calories. This includes “luxury” foods like candy. But it also includes the sugar hidden in our regular foods. By the time kids have finished their sugar-filled yogurt or cereal for breakfast and downed their flavored milks, they are already nearing their “discretionary” limit for the day and it’s not even lunch. Even the healthiest of our kids are taking sugar hits of proportions unheard of for the thousands of years of civilization on planet Earth save the last 50 years. If we as mothers don’t draw a line in the sand and scream “Enough” with the same primordial force that we used to bring our children into this world, we may not have them around that long. Shockingly, there are now children with diabetes, heart disease and morbid obesity. While it is easier to send in the Twizzlers and forget it, my conscience wouldn’t allow me to be silent. I find myself out $20 in baseball cards, wearing a big scarlet letter “S” all in the name of EOG testing and thinking up a new rhebus of my own – “How can we teach our children to eat the right things when at every corner and even at school we are bombarded with opportunities to fall even further down the slippery sugar slope than we already are?”

Donna Bauman lives and works in Chapel Hill and volunteers in the local schools.